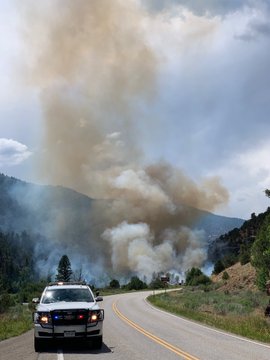 Locations include, but are not limited to, Mancos and Hesperus.

This advisory will be in effect until 9 a.m. Monday.

The Colorado Department of Public Health and Environment is reminding residents to remain indoors if smoke becomes thick in your neighborhood, especially those with heart disease and respiratory illnesses. Additionally, this applies to the elderly and the very young.

If visibility is less than five miles in smoke, that means smoke has reached levels that are unhealthy. Residents should consider temporarily relocating.

The moderate and heavy smoke is due to a wildfire in far eastern Montezuma County and far western La Plata County spanning the County Line.

The fire is located approximately 20 miles west of Durango.

Red Flag conditions are present, and smoke production at the fire could increase significantly and move in a northeastward direction, potentially impacting locations along Highway 160 near La Plata Canyon.