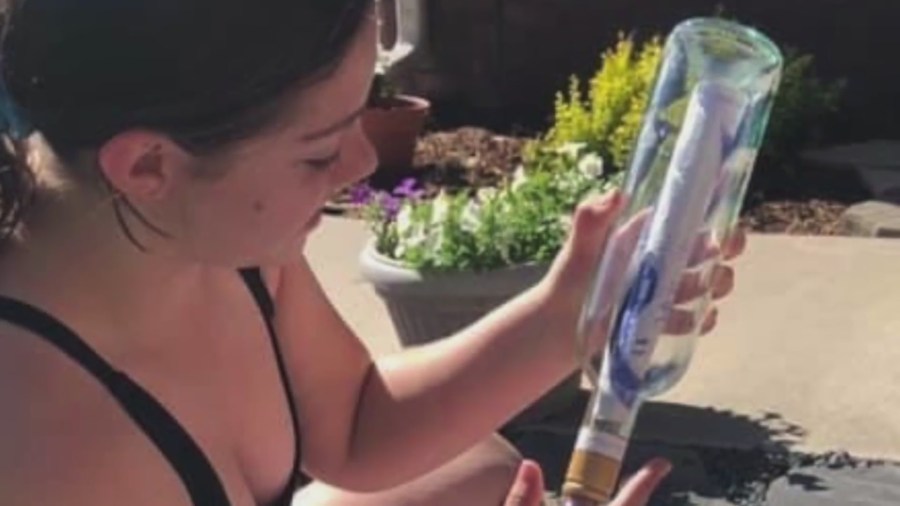 LOVELAND, Colo. (KDVR)– A “message in a bottle” can hold nostalgic notions, but a local family just discovered one with current ties.

“I had no idea what we had until we broke it open,” Greg Dewey said.

In the tranquil waters of Boedecker Lake in Loveland, a local family made a rare discovery.

“As I got closer, I realized it was a bottle and thought it was just trash. So, I picked it up and then I realized there were all these different colors inside.”

Dewey was paddle boarding last Wednesday with his wife and two stepdaughters, when he spotted something glistening in the water. He scooped it up. It was a message in a bottle.

“It was something straight out of a movie,” 13-year-old Anna Tobey said.

With anticipation building, the family struggled to get the note out of the narrow-necked bottle. They used a hammer to break it open and were greeted with striking images.

An anonymous artist drew eleven faces on the front and back of a piece of paper.

“They evoke something different when I look at each one of them,” Dewey said.

“There’s different colors of pen used but I think that’s to show it doesn’t matter what color you are,” Anna Tobey said.

In the middle of the images the words the artist wrote, “Be the change” with the date of June 10. The family believes this floating note, is symbol of inspiration in light of the protest over the killing of George Floyd. It’s a personal call for action.

“It made me think that I need to have lasting change in my own heart after this, and make the world a better place,” Dewey said.

Now the family plans to create their own message in a bottle, along with the original artwork – to continue to spread the message of change.

“They’re all tied together. At the base of all the protest is “be the change.” If you want to see something change you have to make it happen,” Anna Tobey said.