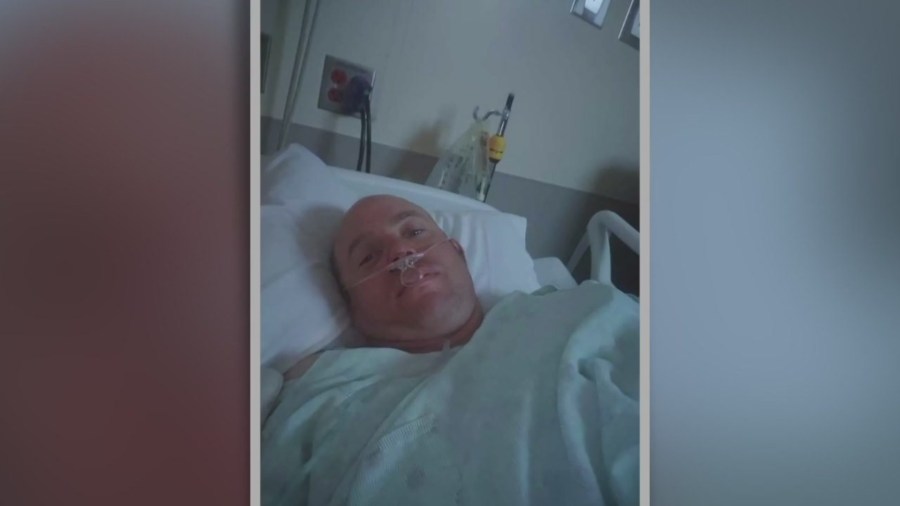 LITTLETON, Colo. (KDVR) — A Littleton man has been released from the hospital after he was impaled by a branch on June 6.

That storm brought down trees and power lines across the Front Range, including on Quitman Street in southwest Denver, where Erich Newman was helping his mom move things into storage.

“I went to walk back to the backyard, and that’s when I heard the wind,” he says. “This awful, shrieking wind noise started coming out of no where.”

Newman says the sky quickly turned black, and he grabbed his daughter to rush inside.

“I felt branches just hit me in the back of my head,” he says. “I looked up to see my daughter, and she had this horrifying look on her face.”

Newman initially thought he was pinned underneath a tree, but quickly realized it was much worse.

“I stuck my hand behind my back, and that’s when I knew,” he says. “I looked at the neighbor and said I need you to call 911 immediately. It’s in my back.”

Newman was taken to Denver Health, where doctors found a branch entering through his back, and exiting out his side.

They performed emergency surgery to remove the branch, which missed his organs by just inches.

“They said it missed my spine by less than half an inch, and missed my kidney by about a millimeter,” says Newman.

Newman tried to keep a positive attitude while in the hospital for five days, joking with doctors and nurses about how surreal his situation was.

“I said, ‘Hey, I hope you know I want that stick. Don’t throw it away, it’s going home I’m putting that stick on the wall downstairs in the man cave,’” he says.

Newman was released from the hospital Thursday, and brought home the branch as a souvenir.

His wife Kristin says she has no problem with him keeping it, but says there will be a discussion over where it ends up.

“It’s something I want to see as a memory,” says Newman. “That was the day I got a second chance.”

“Mother Nature dropped a tree on me, but someone nudged me just enough to say not today,” he adds.